LEGALIZATION AND REGULATION OF CANNABIS IN CANADA

The Canadian Government’s Task Force “completed its report on the design of a new system to legalize, strictly regulate and restrict access to cannabis”.

In return, the Canadian government announced that legislation would be introduced by July 2018. The Task Force’s report will be considered by the Government of Canada as the legislative starting point. 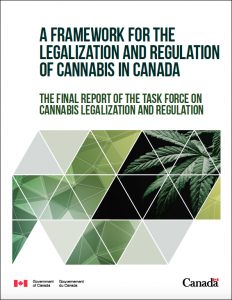